Between the sea and the land, here is Cinquale: a small strip of land touched by the Mediterranean Sea and framed by the majestic Apuan Alps.
Once, a fishermen’s and a quarrymen’s village, nowadays a tourist resort and a wellbeing spot thank to its incredible climate that attracts both Italians and foreigners alike, for a beach holiday and a trekking experience along the Francigena and up on the paths that go along our Mountains.
Restaurants, hotels, local trattorias and a fully equipped beach, make this place, the place where to spend your holidays with your family, your beloved one or, why not, by yourself, because the welcoming atmosphere that pervades Hotel Giulio Cesare, will make you feel at home. 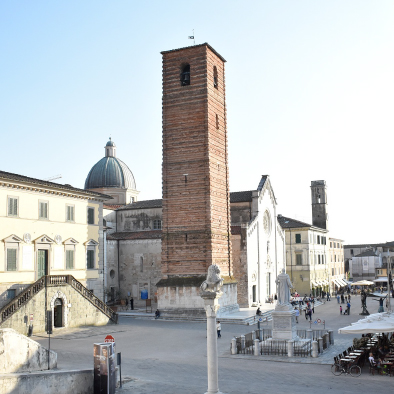 Pietrasanta has gained, throughout the years, the well deserved reputation of city of arts, thanks to its many contemporary and modern art galleries that enrich the small and beautiful Renaissance town, made famous by its splendid square that frames the many monuments and the magnificent Cathedral made with white Carrara Marble.
At only 3,7 miles from Hotel Giulio Cesare, Pietrasanta offers a valid alternative to the beach, in case of a rainy day, with its 35 restaurants placed in the city centre that will make you live, not only an art experience, but also a food experience to be remembered. 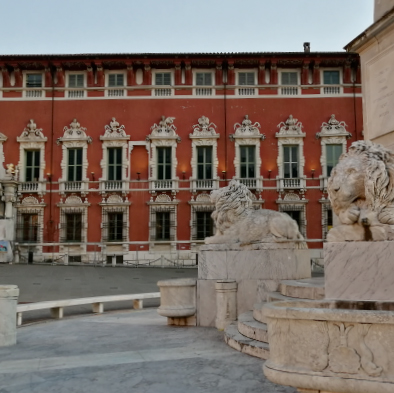 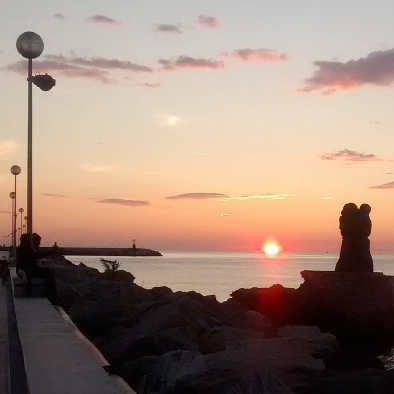 A seaside town, this is how Viareggio can be described, with its Liberty buildings that make it rich in style and elegance.
At only 7,4 miles from Hotel Giulio Cesare, Viareggio is worldwide famous for its Carnival that in February invades, with its masks, the boulevards and attracts thousands of visitors every year.

Carrara and his Marble Quarries 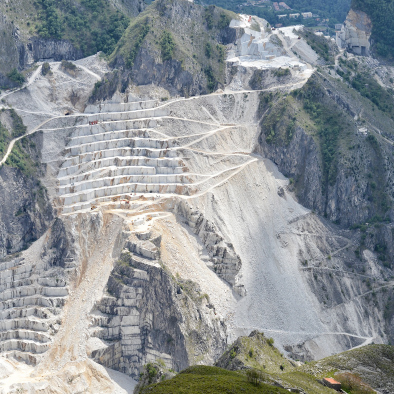 Carrara is world-famous for its exceptionally pure, fine-grained white marble. Its marble has been quarried since Roman times and Michelangelo used to come to local quarries to choose blocks of stones for his Masterpieces.
The untamed scenery, the white screen slopes and the gigantic scale of the work undertaken by man are an amazing sight.
Thanks to special off road 4×4 Jeeps, you will be taken up to 1200 mt altitude in unique and magnificent scenery, where strong emotions are mixed with 2000 years of history and culture.

Distance from Cinquale to the Carrara Quarries: approximately 20 km – 12 miles 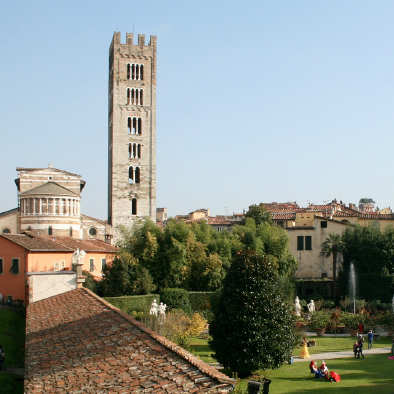 A city worldwide known for its historical buildings, its round Piazza dell’Anfiteatro, its historical center and its beautifully kept 15th century walls, where you can go and bike breathing in, from above, the spirit of the city.
Lucca is at 40 kms from Hotel Giulio Cesare and can be reached by SS Sarzanese Valdera or by the A11 (way in Versilia, way out Lucca Ovest) or by train, leaving from Querceta (Seravezza, Forte dei Marmi) train station and using a connection train in Viareggio. 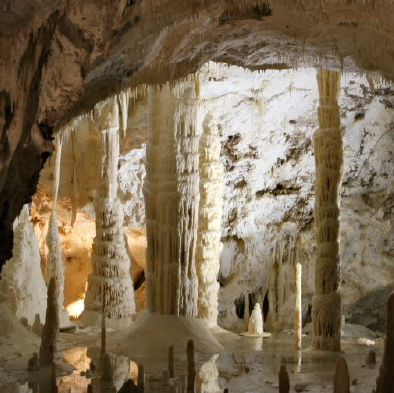 In Versilia, in the heart of the Natural Park of the Apuan Alps, there is a “Hollow Mountain” which holds within the secrets of 5 million years long geological history: this is the Antro del Corchia.
Inside 60 km of galleries, pits and pools, with a maximum difference in height of 1200 mt and an intricate system of Karst tunnels, make the cave of Mount Corchia, Italy’s most imposing underground complex and one of the largest in the world. 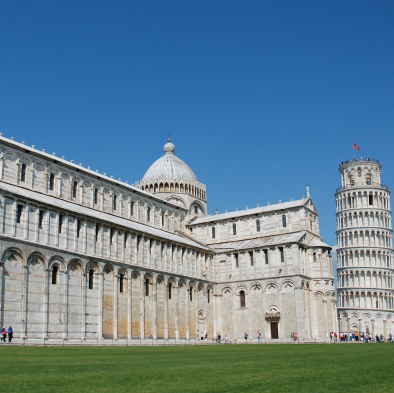 Pisa, as well as the most beautiful cities and towns of Tuscany, are easy to be reached from Hotel Giulio Cesare.
At only 40 kms from the hotel, with its Miracle Square, its Baptistry and its Leaning Tower, Pisa is the target of milions of tourists that every year go and visit this architectural miracle, to walk along the streets that lead you to the Piazza dei Cavalieri to reach the Arno river that runs across Tuscany and Florence before reaching the city of the leaning tower.
Your walk in Pisa will take you to the spectacular Chiesa della Spina, a jewel of Gothic art, placed as if by magic, on one of the bank of the river Arno, that testifies the historical past of Pisa as a Republic.
You can reach Pisa by car on the SS1, Aurelia, or A12 Motorway-exit, Pisa centro, or by train from Querceta (Seravezza-Forte dei Marmi) to Pisa Central station stazione.

The Cinque Terre are one of the most uncontaminated areas in the Mediterranean Sea. Five miles of rocky coast among two promontories, thousands of kilometers of dry-laid stone walls, five small towns castled up on stone spurs in minuscule creeks. For their history and their position, the Cinque Terre have not suffered a massive expansion. The vineyards, typical of this area, have contributed to create a unique landscape with dry-laid stone walls, winding paths, enchanting beaches between cliffs and clear waters.
Not only sea, the Cinque Terre offer beautiful footpaths with take breathing view, such as “Via dell’Amore”, churches, oratories and old castles, food and wines of first quality.
The Cinque Terre are National Park and UNESCO protected territory since 1997.
Riomaggiore, Manarola, Corniglia, Vernazza, Monterosso are the five villages that form the Cinque Terre, suspended between sea and land on sheer cliffs upon the beautiful sea.

During summer time, starting from Marina di Massa dock, a mini cruise will take you to Cinque Terre and will allow you to spend an unforgettable day.

Riomaggiore is the first town arriving from La Spezia.
Caught between two steep terraced hills descending to the sea, this village strikes visitors with its delightfully coloured houses built vertically. Here it starts the “Via dell’Amore”, that takes to Manarola, a very suggestive pedestrian street, with beautiful landscapes and the noise of the waves smashed against the cliffs.

Manarola is the calmest of the Cinque Terre, later discovered by the tourists. A bright and colourful scene, a paradise of vineyards and olives trees, an ancient village with salt-like painted houses which seem to rise from the cliffs of the narrow harbour. It is possible to enjoy the nature with relaxing walks.

Corniglia is the only village of the Cinque Terre that can hardly be reached by sea. It is located on a hundred of meters high steep promontory, close to a hill with many vineyards from which it is possible to admire all the other four towns of the Cinque Terre.

Lying on majestic cliffs, Vernazza, with its mysterious alleys enclosed among the colourful houses is included in the list of the 100 most beautiful villages in Italy and boasts a long maritime tradition, proud of its past sailors and warlords.

Monterosso is the most western town of the Cinque Terre. The village is protected by hills covered with vineyards and olive groves. The poe t Eugenio Montale, who was awarded the Nobel Prize for literature in 1975, loved Monterosso and used to spend the summer in this village that he described as “rocky and austere, asylum for fishermen and peasants…”. 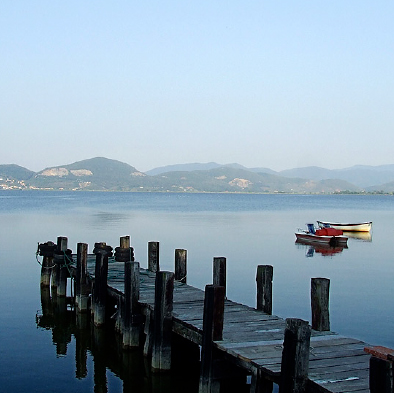 Torre del Lago, home of the Puccini Festival, lies between the Lake of Massaciuccoli and the Tyrrhenian Sea. The Festival welcomes about 40,000 spectators every year to its open-air theatre, just a few steps from the Villa Mausoleum where Giacomo Puccini lived and worked.
His mortal remains are now in a small chapel inside the Villa.
Torre del Lago is a favourite destination of Opera lovers and tourists who wish to visit the places where the most beloved composer of the 20th Century lived.

The Marble Experience at the HOTEL GIULIO CESARE

Stay with us and go to Pietrasanta and learn how to sculpt the marble that Michelangelo used to make the David with one of the most renown and skilled teacher of the area, living and working in Pietrasanta for over 20 years.
Your teacher has high credentials, in an English speaking nice man, carving stone and marble for all his life, he has created a worldwide famous centre for sculpture and marble carving.
Born and apprenticed in Liverpool, England, he is recognized internationally as a master craftsman and an accomplished tutor and has devoted his entire life to marble.
His work can be seen worldwide in the form of Public Monuments, Portrait Busts, Private Commissions and Architectural Restoration. 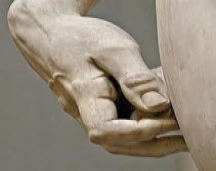 Maximum number of people each session: 2 people at a time
One to one tuition: +25% on above costs.

Workshop in the vineyards

A very nice workshop in Tuscany, where one of the most important wine producers in Italy gives us the exclusivity for photographic lessons. You will work among their olive groves and vineyards and will study the landscapes lights. In the evening You’ll analyse the works on pcs and correct RAWs with Photoshop. 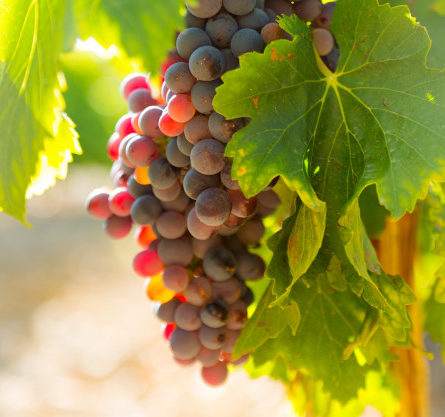 Do our
Virtual tour!